Rosin.  If you play a violin-family instrument and use a bow with horsehair, you are familiar with the stuff.  It comes in many price points, packaging, and formulations, but its core purpose is the same – create the friction between the bow hair and the string that allows the instrument to vibrate.  Take a look at this super-slow-motion video of how the rosin on the bow hair causes the “stick-slip” loop that creates sound – https://www.youtube.com/watch?v=6JeyiM0YNo4&t=39s.

I had been experimenting with a new rosin after using Pirastro Oliv for most of my life.  While I was initially taken with it, I didn’t like the amount of rosin dust it created and the fact that it would aggressively build up on the string.  A friend of mine was experimenting with Larica copper rosin and I decided to try it.  I couldn’t find the copper rosin anywhere but I found two “hardness” levels of the gold rosin – III and IV.  So far I have been using the III hardness with incredible results.  I need to use very little and, partly as a result, it produces very little dust.  I am going to look into carrying it here at the store in the more popular hardness and metal combinations.

What rosin have you been using lately that you love? 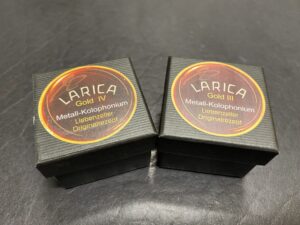