One of the items that really flies off the shelves at the beginning of every school year are mutes.  But which one?  When customers ask for a mute, I always ask if it is for playing in orchestra or for practicing at home.  In the photo below, the mute on the left is a “playing” mute (also often referred to as a Tourte mute) and the one on the right is a “practice” mute.  Whats the difference?  While the playing mute does reduce the volume of the instrument somewhat, it primarily changes the tone “color”.  It is called for in music when the composer wants a different effect from the string instruments.  The “practice” mute on the right attempts to nearly silence the instrument so that it does not disturb surrounding people.  It is perfect for late night practice, or playing in a hotel or apartment.

While most of the mutes we sell this time of year are the “playing” variety, it is good to know the difference! 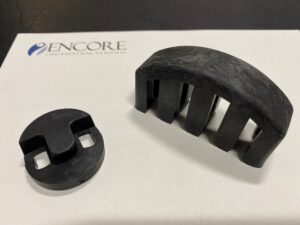