Most people familiar with band and orchestra can identify which instrument is a cello when shown a room full of string instruments.  Fewer people can recognize which historical form a cello is patterned after.  While many are familiar with the name Antonio Stradivari, fewer know the names Domenico Montagnana, Matteo Goffriller, or Guarneri ‘filius Andreae’.  These are all men who made cellos of slightly different shapes when compared to Stradivari.  Each of these treasures from the past are prized for different characteristics and modern makers and workshops strive to capture some of those attributes by copying the outline, arching, and thicknesses from the best examples.

One pattern that seems to come and go in popularity is a particularly wide model from Montagnana.  Anyone familiar with Yo-Yo Ma, Lynn Harrell, Truls Mork (and others) have heard Montagnana cellos either live or on recordings.  While generalizations are always limited, a powerful bass register and reedy, textured treble are often attributed to the best examples from Montagana.  Is there a downside?  Occasionally.  The width of the upper and lower bouts can make the cello unwieldy for smaller players, and the wide c-bout (middle) requires a high enough bridge and neck projection so that the cellist doesn’t run the bow into the cello on the A-string.

We have three examples of Montagnana-inspired cellos in the shop at three radically different price points.  The incredible Christopher Jacoby cello ($20,000) is a personal pattern, but finds inspiration from Montagnana.  The Snow JHS cello we just received ($9,000) has a thundering C-string and remains powerful throughout its range.  A 4000-model cello from Core ($4,000) retains many of the characteristics of its pattern at a lower price point.

Once you have your Montagnana, you need a case wide enough!  While the Musilia M6 would be a bit expensive to pair with the Core cello, it would be perfect for the Snow or Jacoby.  So perfect, in fact, that I’m running an unbeatable special (truly unbeatable) on an M6 case when purchased with either the Jacoby or Snow.

My invitation remains the same – come in and play! 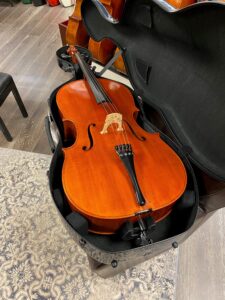 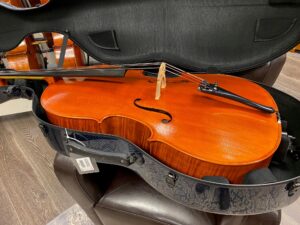 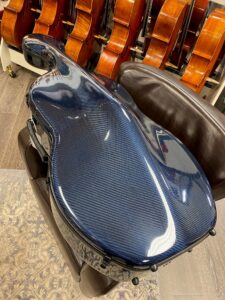