Alan Rafferty is a cellist with the Cincinnati Symphony Orchestra, cello faculty at University of Cincinnati – CCM, and Artistic Director of the Cincinnati Young Artists…and he’s also the young man Yo-Yo Ma is instructing in this photo as part of a masterclass at the Interlochen Arts Camp in the summer of 1995.  Alan was principal cellist of the top orchestra at Interlochen that summer.  Yo-Yo performed with the orchestra, taught this masterclass, and spoke to the students.

The goofy kid just to the right of Yo-Yo’s head in this photo is me.  I remember sitting on stage for that class, feeling like I was in the presence of a god.  Yo-Yo even asked me how I would sit and look if I was royalty (something to do with the musical idea in the piece Alan performed in the class) and I remember it…not going well.  I was just TOO OVERWHELMED that Yo-Yo Ma actually spoke to me.  I’d been taking private cellos lessons for less than two years at that point.  I was in that phase of a new activity where everything was flush with the thrill of discovery.

I’ve seen Yo-Yo Ma many times in concert since then and friends of mine in the music world have worked closely with him over the years.  They say he is just as friendly and genuine in close contact as he is meeting fans after a concert.  I love that about him.

During rehearsal that summer Yo-Yo broke his A-string.  The common practice is for the principal cellist to hand his cello to the soloist, take the soloist’s cello and change the string, and then swap them back when possible.  Alan did all of this like the pro he was and is, but he knew there was a guy at camp that summer that would treasure that broken A-string even more than he would.  Alan gave me that broken string from Yo-Yo’s cello after rehearsal and 26 years later, that string still sits in a place of honor in my music room at home.

Photo copyright ARTICA – The Archives of Interlochen Center for the Arts; used by permission 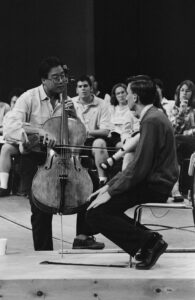